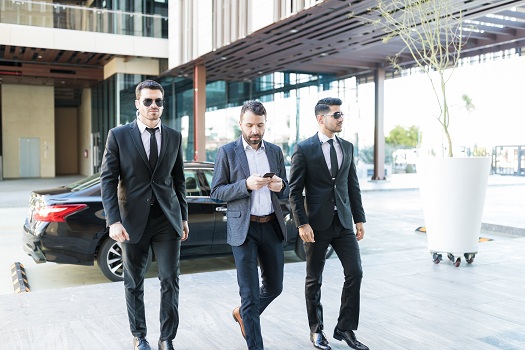 In today’s world, it never hurts to pay attention to your safety in public spaces. Choosing to visit places with security measures already in place can ensure you don’t become the victim of a crime. However, there are times when that may not be enough. Personal bodyguard security is an extra layer of protection for people in unique situations or who have lifestyles that require taking additional safety precautions.

People Who Are Known for Being Wealthy

Owning a large corporation or winning the lottery definitely has its perks. However, there’s also a downside to being extremely wealthy. People who have large amounts of money are at risk of being robbed. There have also been incidences of wealthy people being kidnapped and held for ransom. Bodyguards can accompany wealthy individuals and keep an eye out for suspicious people so they can usher their clients to safety. A guard can also deter criminal activity during bank drop-offs and other situations when large amounts of money must be transported.

The rise of social media stardom has led to an increased demand for security guards. Experiencing sudden fame leaves people vulnerable to criminal activity. Someone who just became a celebrity might not know how to safely get away from a crowd or protect him or herself from physical assault by a fan who’s eager to get too close. Security guards are adept at crowd control. They can even help new celebrities find ways to get out in public without their fans noticing them.

Someone Who Just Achieved Notoriety

Most people don’t want to become the target of public animosity, but social media has made it possible for many people’s worst moments to be shown to the world. Even after a public apology, there may still be people who want to retaliate by harming a person. A personal security guard from one of the premier security companies in San Diego can prevent someone from being hurt by another person who doesn’t like what the individual did in the past.

Criminals often scope out crowds to identify people who aren’t familiar with the area. Travelers tend to make mistakes such as leaving their suitcases unattended or walking down dangerous dark alleys. Security guards can keep watch for thieves and other dangerous people. Anyone who’s traveling to a country known for criminal activity against tourists may want to bring a security guard along for protection from kidnapping and assault.

Things can get drastically unpleasant when a relationship ends. Domestic violence survivors may fear for their wellbeing if their ex-partners continue to threaten them. People going through volatile divorces might also worry that their ex-spouses might be willing to do them harm as an act of revenge or to get what they want. Personal guards are adept at deescalating conflicts, and just knowing there’s a guard around could stop someone who plans to commit an act of violence.

Eagle Eye Security is a leading provider of bodyguard services San Diego residents trust for outstanding professionalism and an unwavering dedication to exceptional service. Whether you need protection for yourself or your property, our highly trained professionals can provide you with peace of mind. Call us today at (619) 278-9990 for more information and a free quote.